want to work faster and better? 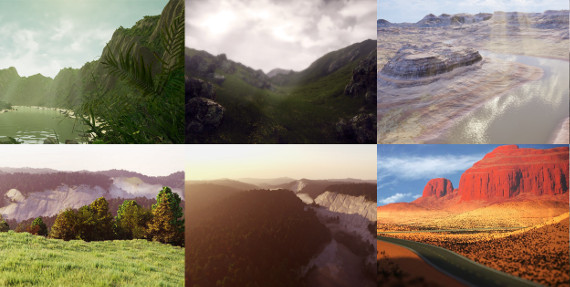 Request a demo in our booth #739 or an online demo (if you can't make it to the show) during Siggraph 2018 and receive a 30% discount on Instant Terra*.

See how you can create 3D terrains faster and more efficiently, and see your changes in real time in the final resolution with Instant Terra.

Request a demo or a private meeting

Our expertise and experience

Our team has a vast experience in software development for digital creation in the field of video games, lead by Alexis Vaisse who is both Expert Programmer and Project Manager, and Marianne Calva, co-founder of Wysilab.

Export to your favorite editor

We have published numerous node-by node video tutorials that make getting started with Instant Terra quick and easy, even if you have never used a procedural tool before.

Speed up your production time

Let you work with a procedural tool

Take onboard your feedback

Export to your favorite editor

CG Channel, the community for entertainment artists, promotes the release of Instant Terra v1.1 as a fast, lightweight tool for creating terrains, particularly for real-time work.

Instant Terra in the news: 80 Level

Instant Terra in the news: 80 Level

80 Level, the best source of information about the gaming industry and its recent trends, promotes the new features of Instant Terra v1.1.

New terrain generators: Ridged noise and Billowy noise. These noises are standard modifications of the Perlin noise algorithm. They produce sharp discontinuities and patterns that resemble crests or creases. They are often used to create hills and mountains.

Work with color maps on your terrains! Load an RGB texture either from an existing file or one generated in Instant Terra and use it as a color map on a terrain. If you mix two terrains, each with a color map, the color maps are also mixed.

Disable a node in a graph to make it easier to test with and without a node.

View a terrain as a mask.

Montpellier Méditerranée Métropole, whose goal is to become most attractive metropolitan areas in France and Europe as a key area for innovation and excellence, promotes the release of Instant Terra v1.0.

Here is a translation of the French article.

Wysilab has released the first version of its Instant Terra software for video-game studios and animation studios.

Instant Terra is the first installment of a new generation of tools that allows for the rapid creation of 3D digital landscapes, supporting very large terrains that meet the new ambitions of the digital creation sectors.

Instant Terra offers some very significant advantages:
* No size limit: Terra Instant supports terrain of several thousand square kilometers.
* Real-time display: with Instant Terra, the user is able to work smoothly by viewing live the impact of his tests, allowing validation of the settings as and when the tests are made.
* Work in the final resolution: all the work is done in final resolution, so the user can master every detail of his creation at any moment.

The first commercial version is available from the Wysilab website. A free trial version valid for one month can also be downloaded from the site.

Read the article
See other articles on Wysilab's blog

Some comments from Instant Terra users

Igor Kalustov: "I am a Senior Technical Artist, working on a brand new MMO game made with Unreal Engine 4. From my experience with Instant Terra, I found that this is one of the best and fastest landscape builder that I've seen and tried! I really like the node-based system and very detailed fast rendering. I've tried a few things in Instant Terra so far and I love the blending between terrains, also I love the veeeeeeery fast erosion simulation!)."